You’re invited to join us on Zoom next week for our first virtual talk on July 9th at 3pm.

3. Speaker: Bernd Zechmann Ph.D. –  Director of the Center for Microscopy and Imaging at Baylor University, President of the Texas Society for Microscopy
Topic: “Preparation of plant samples for TEM and SEM investigations – why small labs struggle to keep up with technological advances.”
Date: July 23 at 3pm

There will be a brief question & answer session after each talk. Attendees are encouraged to use their webcams and microphones to encourage discussion. Hope to see you there!

Check out the latest edition of the CMMS Newsletter, in this issue we bring you a series of interesting interviews, announcements and activities from the local Chesapeake region.

Meteorites: From Microscopes to Telescopes!

On Friday, 18 October 2019, CMMS had our Fall Social event at the Maryland Space Grant Consortium (MDSGC) at Johns Hopkins University. The evening began with delicious pizza from Joe Squared, and was followed up by CMMS Treasurer Emma Bullock giving a talk about meteorites – what they are, how we recognize them, some of the methods we can use to study them (focusing on optical and scanning electron microscopes – this is a Microscopy event after all!), and what they can tell us about our solar system.

Following the talk, a series of hands‐on demonstrations gave everyone a chance to be a scientist for the night. Liz Carter demonstrated a Hitachi tabletop scanning electron microscope (generously provided by CMMS sponsor Angstrom Scientific) that was used to look at everything from butterflies to seeds, while CMMS President Ru‐ching brought along a USB microscope that allowed everyone to get up close to some fantastic insects. Emma had brought some real meteorites that people could hold – including a piece of an asteroid core (a rock made of metal!), a piece of the solar system that is 4.567 billion years old (older than planet earth!) and a meteorite that is a mix of metal and rocky material (one of the most beautiful types of rock). Our hosts at MDSGC also laid on demonstrations, including a mirascope (which uses mirrors to make it look as though an object in a box is floating above the box), and a series of “discharge tubes” containing different gases – when a current is passed through the gas, different spectral lines can be viewed through a diffraction grating. Different gases have different emission spectra –astronomers use this technique to look at distant stars and determine the elements of which they are made.

One of the highlights of the evening was the opportunity to use the MDSGC telescope to observe other planets. We were incredibly lucky to have a beautiful clear night, and so were able to see Jupiter (plus three of its moons) and Saturn (and its large moon Titan).

The event had a fantastic turnout – over 50 people came out to celebrate microscopes and telescopes with us, including about 15 children, many of whom are now keen to become astronauts and engineers. We hope you can join us for our next event.

We hope everyone who attended M&M 2019 had a great time. Ru-Ching caught up with some local CMMS members enjoying the conference.

Dr. Rhonda Stroud described her research on the isotopic composition of interplanetary dust particles and micrometeorites and how it aids our understanding of the primitive astromaterials in the early solar system.

Dr. Jiwen Zheng described how electron microscopy research at FDA is used for testing generic drug products and for evaluating medical devices such as the coatings on guidewires surrogates. 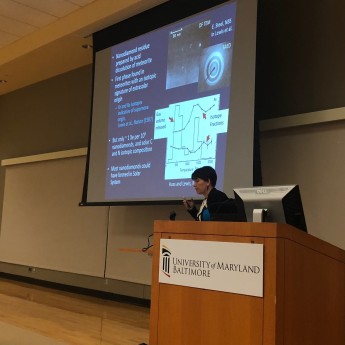 Dr. Rhonda Stroud described her research on the isotopic composition of interplanetary dust particles and micrometeorites and how it aids our understanding of the primitive astromaterials in the early solar system. 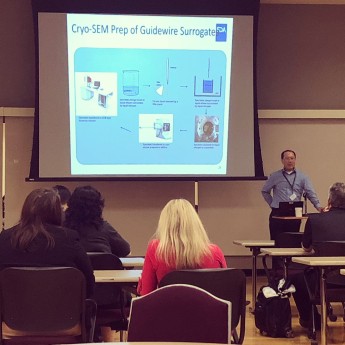 Dr. Jiwen Zheng described how microscopy research at FDA is used for testing generic drug products and evaluating medical devices such as the coatings on guidewires surrogates.
1 2 »